Welcome to the Marian Garcia International Piano Competition and Festival page! Hosted by the Penn State School of Music's piano faculty, this year's event includes competitions and masterclasses for collegiate and high school pianists. The festival was created through a generous grant from Edith Garcia, mother of local physician Dr. Marian Garcia.

We are excited that this year’s event will take place in our new Recital Hall and will make use of our two beautiful new Hamburg Steinways. Competitions and recitals will take place in the new hall using these exquisite instruments.

The high school competition will be held on Sunday, November 10, 2019. It is open to students currently in grades 9-12. First prize is $750; second prize is $400. Senior winners of the competition who are accepted as music majors at the School of Music are guaranteed a minimum of $5,000 in tuition scholarship at Penn State. The application deadline is October 14. Click here for details and application information.

The collegiate competition will be held on Saturday, November 9, 2019. It is open to students who are enrolled and currently pursuing undergraduate or graduate level music studies. First prize is $1,000; second prize is $750. The application deadline is October 14. Click here for details and application information.

On Thursday evening, November 7 and Friday, November 8, there will be opportunities for high school and collegiate pianists to participate in masterclasses with guest pianist Marina Lomazov and Joseph Rackers, as well as Penn State faculty members Christopher Guzman, Kristin Stephenson, and Timothy Shafer. Students who have applied to the Garcia competitions are eligible to participate. Please check the appropriate box on the application form and list your repertoire if you would like to be considered for the masterclass.

Click for directions to the School of Music at Penn State University. 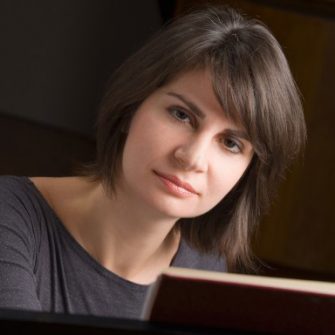 In recent seasons, Lomazov has performed extensively in China, including concerts in Shenyang, Shenzhen, Chengdu, Dalian, Guangzhou, Jinan, Nanjing, Qingdao and Yingkou. She is a frequent guest at music festivals in the U.S. and abroad, including Hamamatsu, Chautauqua, Brevard, Miami, Seoul, Art of the Piano, Burgos (Spain), Sulzbach-Rosenberg (Germany) and Varna (Bulgaria), among others. She has recorded for the Albany, Centaur and Innova labels and American Record Guide praised her recent recording of piano works by Rodion Shchedrin for its “breathtaking virtuosity”. She has been featured on National Public Radio’s “Performance Today”, the “Bravo” cable channel and WNYC’s “Young Artist Showcase” and her recordings have been broadcast more than 100 times by WNYC and WQXR in New York, WFMT in Chicago and WBGH in Boston. 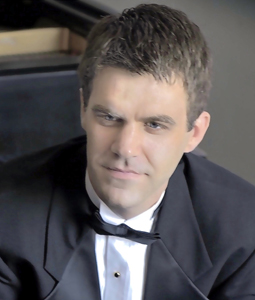 Joseph Rackers is an International Steinway Artist and serves on the artist faculty of the Perugia International Music Festival in Italy, Burgos International Music Festival in Spain, Texas State International Piano Festival and Southeastern Piano Festival in the United States.  His recordings as soloist, collaborative pianist and producer are available on the MSR Classics, Navona, Centaur, Equilibrium and Beauport Classics labels and his performances have been broadcast on radio and television across the United States and Europe. His recent solo release with MSR Classics was widely recognized by the press; “unflappable virtuosity…highly expressive…committed to letting the composer’s voice — as he hears it — come through” (American Record Guide), “compelling power, rhythmic persuasiveness…consummate style…complete mastery” (Audio Society).

Rackers is a graduate of the Eastman School of Music where he earned the Doctor of Musical Arts and Master of Music degrees and was awarded the Performer’s Certificate. His principal teachers were Natalya Antonova and Raymond Herbert with additional study or masterclasses with Julian Martin, Misha Dichter and Blanca Uribe, among others. Rackers has been honored as an lllustrious Alumni of the University of Missouri School of Music for the one-hundredth anniversary of the school and has been recognized by the South Carolina House of Representatives and South Carolina State Senate for his personal contribution to the arts in South Carolina and leadership of the Southeastern Piano Festival.

Pianist Christopher Guzman regularly performs for audiences throughout North America, Europe and Asia, as soloist and chamber musician. He is a multiple prizewinner in many international competitions, including the Walter M. Naumburg Competition, the Seoul International Music Competition, and the Isang Yun Competition of South Korea. Recently, he garnered the grand prize and several special prizes at the 10th Concours International de Piano d’Orléans of Orléans, France. As a result, he regularly travels to France to perform in Paris and throughout the Loire Valley. His CD of German and Austrian music from the past one hundred years, Vienne et après, was released in March 2014 on the Tessitures label.

Guzman’s career has brought him to such venues as Tokyo’s Suntory Hall, Leipzig’s Gewandhaus, Kennedy Center, Carnegie’s Weill Hall, London’s Wigmore Hall, and others. He performs regularly with some of the world’s most exciting soloists including Ilya Gringolts, Antoine Tamestit, David Fray, and Jeremy Denk, among others. He continually performs with members of the world’s finest orchestras, including the Berliner Philharmoniker, the Philadelphia Orchestra, the San Francisco Symphony, the New York Philharmonic, and the Seoul Philharmonic Orchestra. In 2013, he was a guest artist on the New York Philharmonic’s chamber music series “Philharmonic Ensembles.”

His performances showcase a broad range of styles, from Baroque to the avant-garde. He continues to collaborate with many of the nation’s preeminent new music ensembles; his performances have included world premieres by Donald Martino, Nico Muhly, and Paul Schoenfield. The New York Times hailed his performance of Christopher Theofanidis’s Statues as “coiled” and “explosive.”

Born in Texas, Christopher Guzman began studying piano at age nine and violoncello two years later. He worked primarily with Jerome Lowenthal and Robert McDonald at the Juilliard School, Anton Nel at the University of Texas at Austin, and the late Patricia Zander at the New England Conservatory. He is an associate professor at Penn State.

Timothy Shafer has concertized extensively throughout the United States, performing, teaching, and discussing the rich heritage of piano repertoire. He is the recipient of Oberlin Conservatory’s “Rudolf Serkin Outstanding Pianist Award,” Indiana University School of Music’s annual Concerto Competition, and the Pennsylvania Music Teachers Association “Teacher of the Year” award.

Shafer has appeared both as a soloist and a chamber musician in Carnegie Hall's Weill Recital Hall, maintains an active solo recital and chamber music schedule in the United States, and is a frequent soloist with regional orchestras, having appeared in more than 40 concerto performances in his career. As a member of Duo Concertant with violinist James Lyon he has recorded “Outstanding in Our Field,” a CD featuring works for piano and violin by Strauss, Debussy, and Stravinsky. He recently completed a CD recording of hymns with colleague Lisa Bontrager, horn, and daughters Grace Salyards, horn, and Sarah Shafer, soprano. He appears frequently in recital with his daughter, soprano Sarah Shafer.

As professor of piano at Penn State, he has concertized, taught, and adjudicated in South America and Asia. He is also well-known as a frequent masterclass clinician and competition adjudicator throughout the country for professional music organizations and colleges.

Shafer is the co-author of Class Piano for Adult Beginners, published by Prentice-Hall, and his articles on piano teaching and repertoire have appeared in the Piano Pedagogy Forum, the American Music Teacher, and in both volumes of The Pianist’s Craft. Shafer served for many years as the national chair of the National Conference on Keyboard Pedagogy's Student Committee. He recently completed a ten-year service as the senior music consultant for the psalter-hymnal project of the Orthodox Presbyterian Church denominations. The volume was published in the summer of 2017 and is approaching sales of 40,000 copies. Shafer earned degrees in piano performance from Oberlin Conservatory and Indiana University’s Jacobs School of Music.

Kristin Stephenson has won numerous awards, including first prize in the International Young Artist Piano Competition in Washington, D.C.  She has performed in Spain and Germany and appeared in the John F. Kennedy Center for the Performing Arts, Alice Tully Hall at Lincoln Center, and in numerous concerts throughout the Northeast. She frequently serves as an adjudicator and presents on music literature such as Bach’s Art of Fugue and Stravinsky’s Petrouchka. An avid church pianist, she hones her skills in accompanying and improvising on traditional church hymns.
Stephenson has studied with Robert McDonald at the Juilliard School, Christopher Guzman at Penn State, and faculty of the Golandsky Institute.  She was the recipient of a University Graduate Fellowship at Penn State.
Stephenson has taught on the faculties of Lycoming College and Bucknell University. Her students have won prizes at the Steinway Society of Massachusetts Piano Competition, Connecticut International Young Artist Competition, Granite State Auditions, Duquesne Young Artist National Competition, and Music Teachers National Association State Competitions.
Outreach